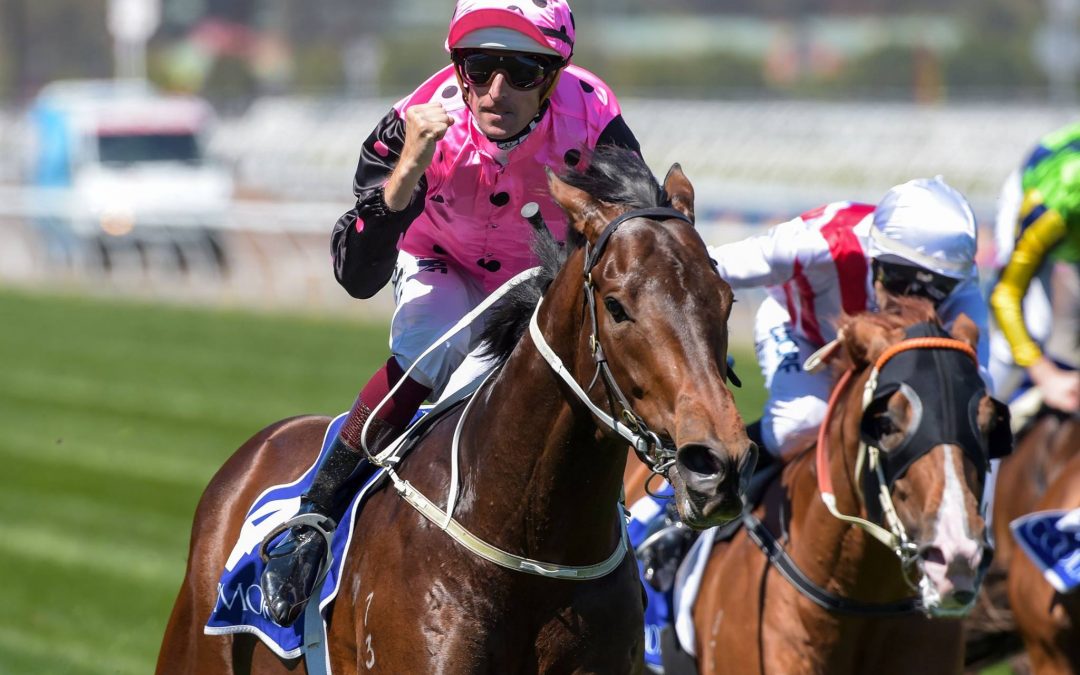 Placed in the Golden Slipper and Blue Diamond last season, the Mick Price-trained Flying Artie had his moment in the sun while leaving a star-studded cast without an excuse in Saturday’s $500,000 Group I Coolmore Stud Stakes (1200m) at Flemington.

Settled back last of the seven starters by Hugh Bowman as the field track towards the grandstand fence, Flying Artie powered home over the final 200 metres to defeat Astern by one and a quarter lengths with Star Turn a short-half-head back in third.

Russian Revolution lost his unbeaten record when clocking in fourth just ahead of the winner’s better fancied stablemate Extreme Choice.

There was further merit in the win of Flying Artie as he had an interrupted preparation adding further merit to his dominant win.

The son of Artie Schiller had made a belated seasonal debut when winning the Group III Blue Sapphire Stakes at Caulfield two weeks back.

“I will give a little mention to Damien Oliver because this is his horse and through similar circumstances, he was here winning the Derby on Preferment a few years ago so racing can have its up and downs.

“To have the opportunity to ride him, beautiful horse and he’s only going to improve as he gets older.

“He’s the real deal physically but I think mentally, he appreciated just being snugged in behind him and being exposed late.

“It was a dominant win and it spells very exciting things for a bright future, because that was a very strong race.”

Price said that Flying Artie may well have made his final start of the spring.

“For him to draw barrier one and make one of those Hughie Bowman mid-race decisions, to get in the fat part of the race where Russian Revolution and Astern were, was probably what won the race,” Price said.

“But he’s got to have the horse under him

“He’s always been a good horse and he’s had his excuses, especially in the Blue Diamond, but today just franks him as a stud colt and I couldn’t be happier.”

“I’ll be mindful of how he is Sunday, Monday, Tuesday, Wednesday so it depends on how the horse is and what happens during the week.

“I definitely don’t have to (back him up in the Darley Classic) and he’s got a great autumn in front of him.”

In earning his third stakes win and the first at the highest level, Flying Artie advances his overall record to 3 wins, 2 seconds and 1 third from 6 starts with earnings of $1,266,000.

A half-brother to the 6-time winner Belflyer (Bel Esprit) and 2-time winner Belsapphire (Bel Esprit), Flying Artie is the third foal of the stakes-winning Rubiton  mare Flying Ruby whose dam Parkhill’s Flyer (Brigand) is a half-sister to the Australian Horse Of The Year, Better Loosen Up.

Flying Ruby has been a regular visitor to the sales ring. After failing to make her $60,000 reserve at the 2006 Magic Millions Adelaide Yearling sale, she has made three trips to the Inglis saleyards only to return home after not meeting her reserve.

Her son Flying Artie was knocked down to Paul Whelan for $50,000 from the Goodwood farm draft at the second session of the 2015 Inglis Easter Yearling sale and races for the Whelan and Mula families.

Flying Ruby has a 2yo colt by Helmet named Give and a yearling filly by Pierro. On September 4, Flying Ruby foaled a colt by Horse Of The Year Dissident.

Coming off a sensational season with his two-year-olds, Artie Schiller (USA) is covering a full book of mares at his first season at Emirates Park Stud’s Hunter Valley showpiece at a fee of $22,000.