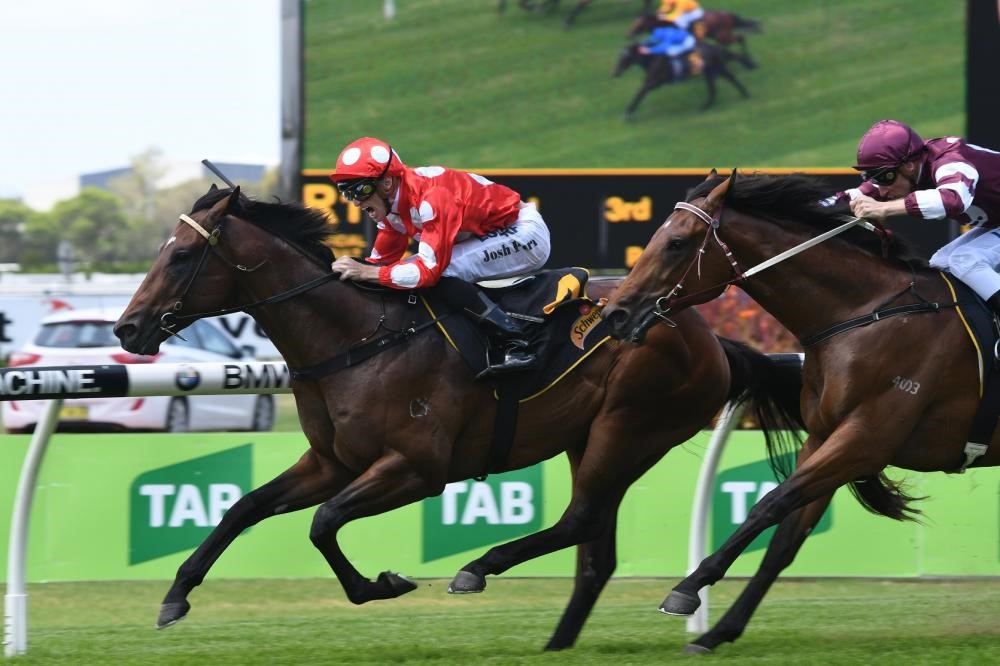 Sale topping colt Chauffeur made the best possible start to his racing career when he scored a stylish win in the juvenile event at Rosehill on Saturday. The headline act of January’s 2016 Gold Coast Yearling Sale, Chauffeur is now on course for a tilt at the $2 million Jeep Magic Millions 2YO Classic after his breakthrough success. The Snitzel colt who sold for $1.6 million was the “must buy” of the famous Queensland based auction for trainer Gerald Ryan and senior owner Damion Flower of Jadeskye Racing. “He was the nicest colt I’d seen in years,” Ryan, who trained Snitzel said. “Damion said, you do the bidding on the big colt – just buy him.” Ryan, seated at the front of the sale ring, big strong and out lasted all others to secure the Strawberry Hill Stud offering for the sale topping price. “I always knew he had the ability, but he didn’t have the best lead in to the race,” Ryan noted. “We missed that trial last week and then he had to trial on Tuesday and run today.” “It was either run today or trial again. We knew he had the ability, but we also know he will improve as well.” “They say the Slipper winner has to race before Christmas, well he has now,” he added. Chauffeur is expected to race again before tackling the multi-million dollar juvenile feature in Queensland and the Golden Slipper is well and truly on the agenda for the smashing looking youngster. If one thing is certain, Chauffeur is bred to win a Magic Millions 2YO Classic. His sire (Snitzel) ran third in it. His dam (Mirror Mirror) won it and his half sister (No Looking Back) was first past the post in one as well, before being relegated to second after a contentious protest. Colosimo staked her own claim for the 2YO Classic when she went two for two with a strong win in the Eagle Farm two-year-old race later in the afternoon. Carrying the blue colours of Aquis Farm, Colosimo proved too strong for her rivals cruising home under Kerrin McEvoy to win softly. At her previous run the daughter of Foxwedge came from back in the field for a swooping win at the Gold Coast. Trainer Steven O’Dea said the filly, a $55,000 Gold Coast Yearling Sale purchase, would race again before the Classic and connections had the option to add blinkers for the big race. Colosimo is a graduate of Rosari Farm – the same nursery which bred and sold Mirror Mirror, the Magic Millions Classic winner and dam of the aforementioned Chauffeur. Meanwhile, Goulburn trainer Kurt Goldman will also head to the $10 million Magic Millions raceday with progressive filly Eckstein after she won today’s listed Mode Plate (1200m) at Eagle Farm. Goldman said the $165,000 Gold Coast Yearling Sale purchase from Vinery Stud could run in either the $2 million Gold Coast Magic Millions 3YO Guineas or the $1 million It’s Live! in Queensland Magic Millions Fillies & Mares. The I Am Invincible filly has won three of her six starts and was an original entrant for the Magic Millions Racing Women promotion – joining the likes of Global Glamour, Perignon and Foxplay as subsequent stakes winners owned 100% by females. Eckstein, who is expected to have her lead up race to the Magic Millions Raceday in the Vo Rogue Stakes on December 31, provided former New Zealand rider Heather Poland with her first stakes success. Exciting New Zealand based three-year-old filly Volpe Veloce extended her unbeaten run to five when she cruised to victory in Saturday’s Group Three Eulogy Stakes at Awapuni. Prepared by Graham Richardson, Volpe Veloce will now head to either a Group One or Group Two event as she endeavours to stretch her streak. A daughter of Foxwedge and the group winner Bardego, Volpe Veloce was purchased for $120,000 at the 2014 Magic Millions National Weanling Sale where she was offered by Newgate Farm. As well as races like the Eight Carat and Levin Classics being possible targets, Volpe Veloce also holds a nomination for both the New Zealand Derby and Oaks. Magic MIllions Press Release, Image: Steve Hart.